bromance is in the air 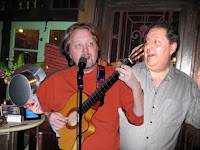 Word on the street is that Adamzinho met up with Paul Sonnenberg last night in Austin. Can we expect to see a "men of tiny band" video up soon?
Posted by Mercedezzz at 10:39 AM 2 comments: 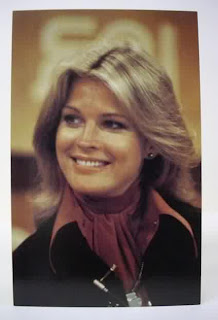 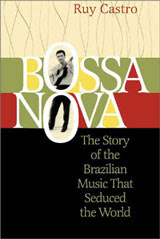 I can't really call them "crushes," because getting through an entire book takes a commitment. I'm a notorious commitment-phobe in this respect, but the following books kept me satisfied until the end, and have made the rounds through Tiny Band. I highly recommend each one, if you want a deeper understanding of the historical, social, and musical underpinnings of Latin music.

Bossa Nova by Ruy Castro is a fascinating overview of the emergence of Bossa Nova movement. I understand the quirky personalities who made up this cultural movement so much better. Castro also does a great job contextualizing Bossa Nova historically and musically. I couldn't put this book down. Absolutely required reading for any Bossa Nova enthusiast.

Tropical Truth by Caetano Veloso is a much denser, more difficult read, but equally rewarding if you stick with it. Kind of picks up where Castro's book leaves off, in that it delves into the Brazilian Popular Music (MPB) movement and the revolutionary musical reaction to it, called Tropicalia. A great peek into Caetano's cultural and intellectual influences as well. A must-read if you want to understand Brazilian music from the mid-sixties on.

The Brazilian Sound by Chris McGowan and Ricardo Pessanha is just a great survey of Brazilian music in general. They go region by region examining the extremely varied musical traditions of Brazil. I first read it 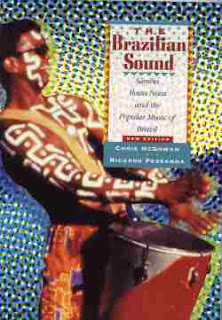 a couple of years ago when I was just learning about Bossa Nova and Samba, and I often refer to it now as my curiosity grows about other types of Brazilian music, such as Choro, Forro, Axe, Frevo, and my most current obsession, Milton Nascimento and the Clube da Esquina movement. Am waiting for a book about these guys!

Cuba and its Music by Ned Sublette is my current read. I bought it for Janet for Christmas, but then discovered that not only had she read it, it was her favorite book. She told me to keep it and read it. "It will change your life," she said, and it already has! How can I explain it? I feel like my eyes (and ears) are opening for the first time to the tremendous legacy of African musical culture. I now see how the history of virtually any music in the New World 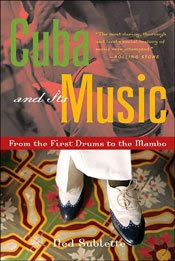 can't be fully understood without facing up to the horrible truth of slavery on the one hand, and being humbled by the astounding resilience and genius of the human spirit (as evidenced through music) on the other. Sublette threads together histories of cultural minglings and powerplays that date back thousands of years and point out how the African influence was always there... ignored and underplayed, but vitally important, nonetheless. And if you look at uniquely "American" styles of music, like Rock-n-Roll, the same can be said about the influence from Cuba. Most people just have no idea how culturally important that little island is. This is a book I'll w

ant to read over and over again. And he's due to come out with a 2nd Volume as well.

NEXT ON THE LIST is Music is the Weapon of the Future by Frank Tenaille, which documents the modern history of African Popular Music. This is a subject I know virtually nothing about, but I can't wait to learn more! It's a good thing musical passions don't have to be monogomous. I don't even want to think about life would be like if they were!!!
Posted by brazilianposer at 9:38 AM 3 comments: 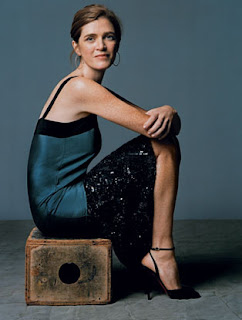 Justin's secret celeb crush, Samantha Power (aka the Genocide Vixen), has resigned as an adviser to Barry O.  Apparently she was talking smack about Hillary Clinton.  Here's the article I heard him read over the phone today, broken.

My current artist crush is Nina Simone.  I was blown away by her piano chops!  Subsequently,  who votes for Bossa Saravah covering "Pronta pra Cantar", the duet she did with Maria Bethania?
Posted by girldrummer at 2:31 PM 3 comments:

the Tiger of Cremona

What I wouldn't give to walk like this.  If I walked like that I could be a star.

It's much easier having a crush on a song than another person: you can spend just as much time obsessing, but there's no danger of rejection/complication/divorce from your current spouse/etc.
I usually have to learn/perform my song crushes before I can push them to the side of my brain; otherwise they play on endless loop. That's surprisingly similar to a crush on a person, isn't it?
Yeah, I've got a a touch of the autism, but on the other hand, the songs ARE great, and this forces me to learn more songs.
Desesperar, Jamais (Ivan Lins/Vitor Martins)

Who Can I Turn To? (Anthony Newley/Leslie Bricusse)
Posted by Adam Haus at 11:23 AM 4 comments:

Hi, all!  We decided at our gig last night that we were going to start a blog for our band.  Let us know what you think!
Posted by Mercedezzz at 9:40 AM 7 comments: