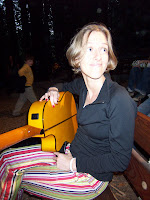 This summer Miguel and I had the chance to immerse ourselves—I’m talking deep, Baptismal immersion—into the musical soul of Brazil. We didn’t go to Brazil, though. Actually, there’s no place like this anywhere in Brazil… or the world. Only in this very special campsite nestled in the shade of ancient Redwoods in Cazaderos, California. What is it? BRAZIL CAMP!!!!!!!!!!!!!!!!!!

I struggle to explain this mystical place. For someone who is as in love with Brazilian music and culture as I am, it was the next best thing (maybe even better than) going to Brazil. There are none of the illusion-crushing realities of Brazil’s social troubles—only beautiful Brazilian energy, the country’s best musicians as accessible as your favorite relatives, generous and patient in sharing their knowledge with anyone with the desire to learn. For the 200 or so American Brazilophiles who show up each week of camp, it’s li 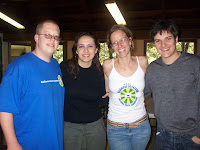 ke dying and going to heaven!

Imagine… you dance and play music from 8:00 in the morning until 4:00 in the morning! I never regretted more my body’s necessity for rest. Caixa rolls, tamborim accents, surdos keeping time… all day long these sounds blend with the wind and the birds. There were Choro ensembles led by the legendary Mike Marshall and Carlinhos Pandeiro de Ouro (below). Baterias for beginners and advanced players led by the likes of Jorge Alabe. Michael Spiro’s Bata Ketu class, which combined Afro-Cuban rhythms and Brazilian rhythms into a mind-blowing sonic shower of syncopation! My personal favorite was the Advanced Guitar ensemble with Chico Pinheiro (above right)… adjectives can’t even approach this guitarist from Sao Paulo who has played with ev 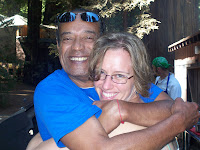 eryone, including my musical heroine, Rosa Passos! At night, there were bonfires next to the jazz tent and underneath a trillion stars. It was hard to pull yourself away to check out the pagode jam sessions, where there was dancing and Bola was inevitably cooking delicious barbequed meat and vegetables.