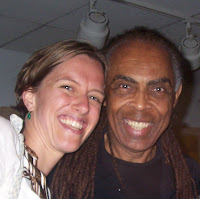 l! One of Brazil’s great songwriters and cultural icons, macrobiotic, yogi, poet, revolutionary imprisoned and exiled under the military dictatorship in the ‘70s… Now he is cultural minister within Lula’s very progressive, inspired administration. To meet him in person was a privilege beyond measure!

Ann Arbor, MI was the first stop on Gil’s US tour with his group Banda Larga (or, “Broadband”). His flight from Spain was delayed, and so he showed up at the Ann Arbor public library about half an hour into the panel discussion on digital technology and new paradigms for intellectual copyright (or “copyleft”). Gil says that laws that should exist to facilitate artist compensation are too often focused primarily on stifling the free exchange of content among fans. He's a strong advocate of Creative Commons, a nonprofit that provides new copyright language that millions of artists are using to register their works with some (as opposed to “all”) rights reserved.

Listening to Gil’s “digital age” concert in Michigan and the next day in Chicago, I started to draw a Tiny Band/Banda Larga connection.  Tiny Band wouldn’t exist without the internet… great sites like Loronix and Um Que Tenha have provided an endless supply of musical material for our repertoire. When I think of how quickly we’ve developed this musicality in

Brazilian styles, I can’t help but be amazed. Never in history was it possible that music-lovers a hemisphere away could delve so deeply into the musical heritage of another culture… without even leaving home!

Then I think of Youtube. Mercedes was the first to make her mark there, and by now we’ve all done our share of performing for the icam. How many transglobal musical collaborations have resulted, with people we’ve never even met in person!

In my mind, the warm, inviting nature of Brazilian musical culture in general, speaks to a universal impulse towards meaningful human connection. Tiny Band is part of the cultural force of artists that are humanizing technology through spontaneous transmission of our musical values—fun, inclusiveness, genre-bending, sharing. And in this age, where differences can be divisive, and technology can isolate us, that's pretty cool.

Brazilian music, more than any other music I know of, lends itself to an interplay that satisfies insiders AND outsiders (i.e. those who know the repertoire and those who don’t, those who play instruments and those who don’t, virtuosic musicians and beginners). If Tiny Band ever manufactured a tchotsky, I'd make it an egg shaker. A symbol of musical inclusiveness, it's the most immediate way for non-musicians to begin to participate and feel the rhythms of this music. Then everyone could join Tiny Band!

By the way, I have a new website. Check it out!!!!! It has some of my original music for free download. Licensed through Creative Commons, of course!

Here are some additional links to check out:

From Legal Commons to Social Commons: Brazil and the Cultural Industry in the 21st Century

Love the music on the new website, and getting to meet Gilberto Gil is soooo cool, good for you.

Great post, Marylee. I'm here to testify that Tiny Band has been a great inspiration to me. I also dig your new website.

hi mercedezzz
haeuaehuuahe xD
i m a brasilian girl and i just loved your singing! my friends and i all agree abaut you having a cutie accent! xD
my name is Maria Júlia and...i just loved to hear you singing DE NOITE NA CAMA...xD
my email is aniax_57@hotmail.com
i would like to talk to you abaut m country, i belivie would be very funny! hahahaha
ok...good by! beijos* xD

I'm a complete stranger and I just fell upon your blog through one of mercedezzz's youtube clips. You write beautifully and as a musician myself, its nice to see someone who "get's it", as in gets the point of all this. Music is for sharing.